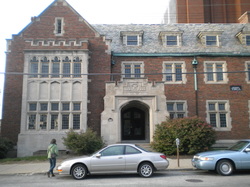 The University YMCA has been a fixture on campus for more than 80 years.  The building began as an idea in 1915 when UC sought to form a contract with the Young Men’s Christian Association in order to open a branch on campus. In 1930, after raising enough funds, the YMCA was built.  The estimated budget for constructing this building was $400,000.  The construction was made possible by the generosity of Mrs. David B. Gamble and her 3 sons, Cecil H., Sidney O., and Clarence J. Gamble who made a $400,000 "Thanksgiving gift" to the project.  Zettel and Rapp, local German architects, designed the YMCA building in Gothic style, similar to Memorial Hall.

At the time of completion, the University YMCA was regarded  as “architecturally perfect in every detail, beautifully furnished in the most appropriate taste and admirably fitted to serve the needs of all students in their social, cultural and religious life on the campus.”  The building features a Collegiate Gothic style of architecture of the Tudor period; it is made of rough textured brick of mellow browns, dull reds, and buff colors, Bedford limestone trimming, and roofed with rough variegated slate.  The exterior is very picturesque and enhancing to the landscape, matching also with the Gothic styling of Memorial Hall.

The interior design is in general agreement with the exterior; it was modified to create an “enveloping atmosphere of welcome, friendliness, coziness and warm pleasure.”  The clubroom of the Y is the most notable space in the building, with its large homey fireplace directly opposite the entrance off the main floor hallway.  This clubroom connects through arched openings with a generous enclosed loggia looking north over the campus. The Calhoun Avenue entrance leads to the staircase and spacious hall, as well as the men’s lounge.  The building also contains many smaller rooms for committee meetings, literary meetings, religious meetings, lectures, conferences, and receptions.  The large hall was used primarily for banquets, dances, and other events, and special dinners and luncheons, served from the kitchen. The headquarters of the Young Women’s Christian Association (YWCA) could be found on the lower floor, which also contained a large women’s lounge, an office for the secretary, a committee room, a dressing room, a rest room, and a check room.

During WWII, the YMCA operated as an Army Service Center, providing recreational and religious activities to soldiers in training at the University of Cincinnati.  94 Army Air Force and Army Specialized Training Program students were housed in the clubroom on the lower floor of the building.

Through its years, the YMCA at the University of Cincinnati offered students a wide variety of services and activities, such as sponsoring an international club, couseling students, offereng employment opportunities, providing financial aid, holding religious meetings, and publishing the student handbook for the University.  Beginning in the 1940s, it served as a cafeteria to students as a dining option on campus